The first quarter of 2014 was full of tech events, with Ellen breaking Twitter with her star studded Oscar Selfie, and the public helping find the lost Malaysian airplane. The three first months of the year also saw some tech developments in the Middle East. So as always, a new issue of the Digital Digest is here to sum up the story. You can see the full report at the bottom of this post – or scroll down for our highlights.

Asnad, the first ever of its kind in the region, allows people to buy and sell “digital goods” like e-books, computer and mobile apps, web scripts, games, video and audio scripts and digital art.

2. Will you soon see delivery drones in the UAE? 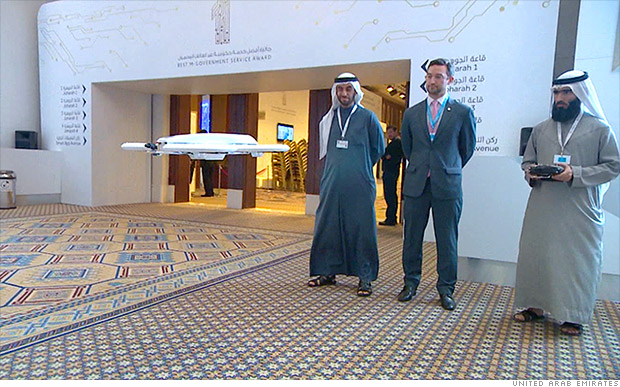 The UAE government intends to start using aerial drones to deliver ID cards and driving licenses to residents of the country. This reminds me of an earlier report we prepared that predicted an increased use of drones this year. Let’s see how many more predictions come true.

A new technology will be installed in all ambulances allowing them to change traffic lights. This should facilitate smoother emergency rescues and potentially reduce life threatening delays.

4. Google Street View is coming to the Middle East

Pretty soon, Google’s cars will roam the streets of Dubai, the first Middle Eastern city to host the mapping service which allows people to get a “street view” when clicking on a Google Map. In fact some people have already spotted them. Which city do you think is going to be next?

Finding out what the popular hashtags will never be simpler, with new locations in Qatar, three locations in Egypt and five in Saudi Arabia. Want to know the other countries on this list? Click here!

Want more stories like these? Explore the full Digest here: